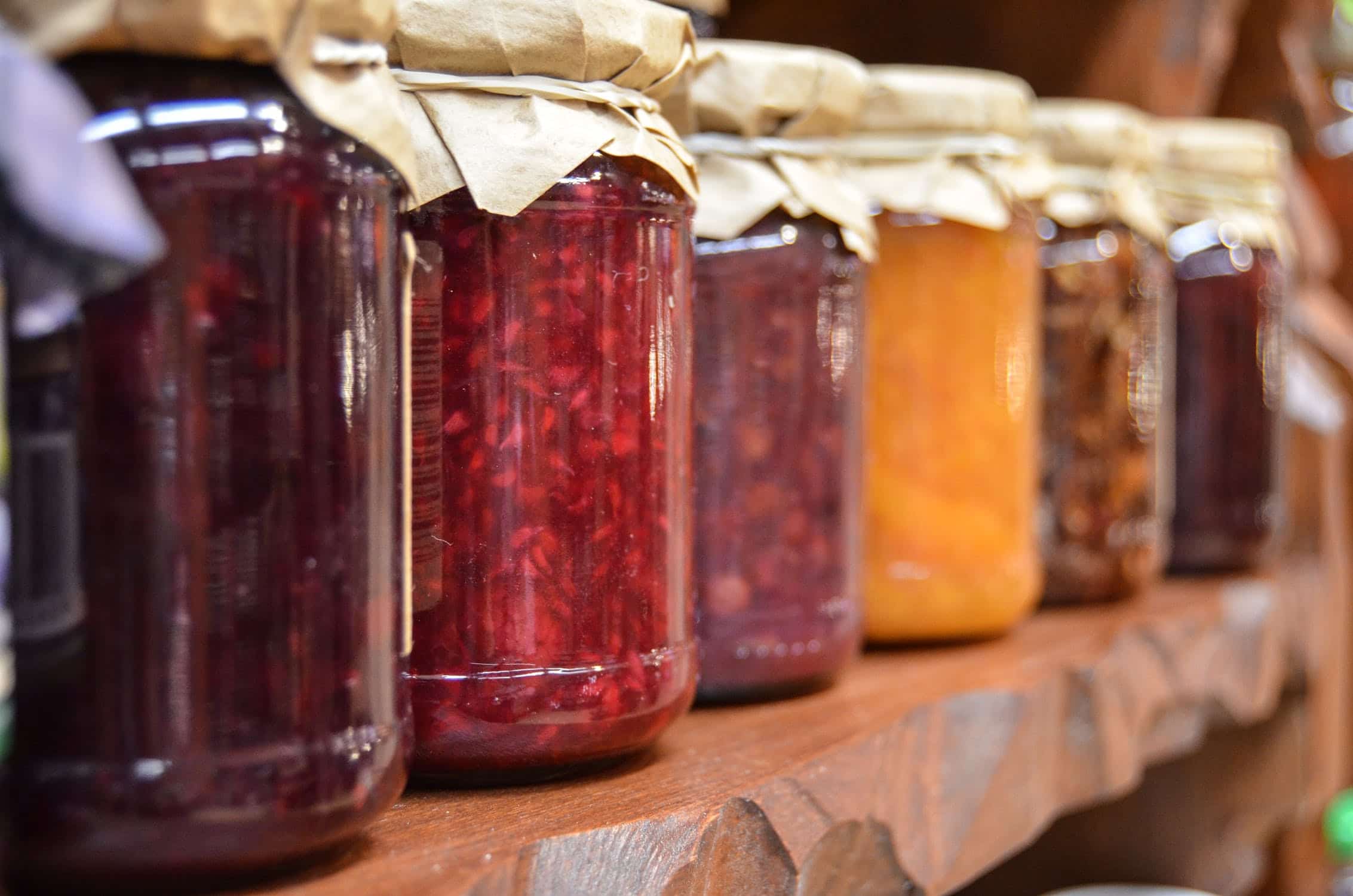 Ever wonder what it would be like to preserve and can your own food?

Maybe you have a lot of seasonal left overs from your garden that tend to spoil too quickly or maybe you just got a really great deal at the supermarket and would like to be able to preserve that fresh fruit or vegetable for as long as possible.

What ever the case may be, I’m going to lay out all the benefits of canning and preserving food at home and why you should definitely learn how to do it.

No matter what you might be preserving, or what method you may choose to use, (canning, drying, freezing or freeze drying) you will find an always ample supply of the most amazing and fresh tasting produce available right in your pantry or closet.

And really I have to say this is one of the best aspects of the whole thing – aside from saving money of course.

Speaking of, Not only will you save a ton of cash by doing it yourself, rather than buying store bought preserves, You will also find that it’s a way more healthy option with far fewer preservatives such as sodium nitrite, sodium benzoate and sulpfur dioxide that is often found in large quantities with store bought products.

That brings us to…

I can’t stress how incredibly freeing it is to know exactly what’s in the food that you are eating, Because you’ve prepared it yourself!

You have so much more control over what goes into your preserves so you can focus more on a healthy lifestyle instead of slogging around on the internet typing in complicatedly named ingredients trying to figure out what the heck they all are.

My general rule of thumb is if you can’t pronounce it, it’s probably not great for you to eat!

Sometimes food prices go up. Thing’s completely out of your control can cause the price of food to skyrocket very quickly.

Often times something happening on the other side of the planet can effect the quality of the food you are buying at the store, Or even complete shortages from droughts or damaged crops from storms like hail.

But you won’t have to worry about any of that because you’ve spent a lot of time learning about the benefits of canning and preserving food and have spent a great deal of effort in stocking up.

The entire point of preserving food is to store it while it’s abundant and use it when it’s not.

The most abundant time of year for canning would be harvest season for example!

If you just picked 2000 lbs of potatoes from your backyard container garden, What the heck are you going to do with them all? It’s not like you can eat all of them before they start to go bad! That’s where canning comes in!

Picture this, It’s thanks giving and your entire family is due to arrive in just a couple of hours.

But wait, Oh no! Whats this? You’ve run out of cranberry sauce! But don’t panic, you’re prepared for this sort of thing because you’ve canned your harvest!

Instead of rushing to the store, fighting large last minute lines of traffic and grappling for the last can of sauce, if there is even any left! You can just go down into the cellar and pull up a can of that wonderful cranberry sauce you made last year.

Not only is it conveniently ready to eat, It’s safe and it tastes as fresh as the day you sealed the jar. Wow!

The most important aspect, like any, It’s a fun hobby! Nothing about canning is annoying.

The entire process is a lot of fun to do and it really does give you a sense of accomplishment when the deed is done.

You’ve gone from seed, to garden, to fruit.

And now all that labor has paid off and your cuburts are full to the brim of all that hard work.

Not only that, but the entire family can take part in the canning and preservation process.

Your son little Jimmy can harvest the seeds he planted earlier in the season while your wife sterilizes the jars.

Everyone has fun exciting time and when all is said and done, You’ve got a nice little healthy snack to eat after a long day of being amazing!

But that’s not everything – There are more benefits of canning and preserving food.

Each bottle is a potential gift for a neighbor or friend or family member.

A potential house warming gift to the couple who just moved in next door – or heck, it’s even a possible side income if you wanted to go down to the local farmers markets and hawk your hard work let your entire community enjoy what you know are the best damn beats this side of the state.

Moral of the story is, Start canning and preserving food. It’s a great hobby for the entire family, it could make you a bit of money on the side and you can count on it to securely feed your entire family during hard times.

It’s good for the environment: Instead of buying plastic or cardboard or glass packaged products at the store, You use re-usable mason jars. This is of course even more effective if you are re-using your lids a few times over as well. Not only does this provide a huge boost to being more environmentally friendly and green, It’s one of the largest unseen (unnoticed) benefits of preserving food.

You have so many more choices: Not all stores are equal, Nor do they carry the same food varieties. Can you imagine if every store had everything? That doesn’t even begin to factor in seasonal varieties.

Neither of which will be your problem if you are preserving your own food stuffs. Know why? Because you already have it all in your pantry! Weather you bought it at the store and canned it, Or grew it yourself, it doesn’t matter! You’ll never have to worry about bouncing around different stores looking for those specific fruits and veggies again, Because it’s all going to be at your finger tips.

You eat less harmful chemicals: This was touched on a bit above, but I felt it was necessary to really compound this point. You eat so much crap when you buy processed foods and it’s really bad for you.

Your body is like a sponge, and it takes in everything you give it. You wouldn’t want to reuse a sponge that was floating around in a sewage tank right? Why do that to your body?

It’s so vital that we give ourselves as many opportunities as we can to avoid harmful chemicals, And canning/dehydration is just the best way to do that. You know exactly whats in your stuff, And you give your body a break from the terrible chemicals. A great benefit of food preservation as any!

You’ve seen the advantaged, But are their any negatives you should know about?

Yes, A few, Mostly though you only have to worry about these if you are using preservatives. If you are just using home methods to either can or dehydrate, or otherwise preserve food, you should be fine as most of the preservatives you will be using amounts to a bit of salt rather than chemical preservatives. If you would like to know more about the disadvantages of food preservation with preservatives, check out healthyeating’s article on the topic.

What are the various methods of food preservation?

There are about 2 dozen common way’s to preserve food that we humans have used from the beginning to now. I won’t go over all of them but a few are:

Just to name a few of the most common done at home methods of food preservation, The others include things like Burial, heating, curing and in some cases freeze drying. I would rather think freeze drying is an industrial method but actually house hold freeze drying has been increasing over the years thank’s to companies like Harvest Right and their affordable freeze dryers.

There are a few more but these are the most common.

If you want to boil down everything preservation, Than it can be defined as attempting to inhibit growth. Growth of what you may ask? Well, Thing’s like:

But it’s not so cut and dry because some preservation methods actually rely on chemical reactions or the growth of specialized microorganisms. Many rice and cheeses for example requires the maker to add special molds just like you would add yeast to certain baking recipes.

These special molds can add flavor and desired textures by forcing a chemical reaction in the cheese.

Another aspect and principle of food preservation, And really, the whole reason it even exists to begin with, is to preserve excess produce. If you live off your own garden, Certainly you would need to grow a full years worth of supply of crops at once inside the limited growing season.

That of course is a problem if you have no method to preserve those items. That’s where canning and other food preservation methods come into play. This way you now have a year round supply of food from the gardening season that won’t spoil in a few months – which would doom you for winter.

But your own personal garden isn’t the only reason preservation is so important. For that we look at the bigger picture in the form of world trade. Everyone wants to be able to have access to everything, and because of preservation we can!

Way back when you were limited to what could be grown in your region, and maybe the outlining regions as well. There was no way you could get some food from one continent to the other and have it remain pleasant. Even 1 side of Europe to the other for example would have been a long, hot journey. Food preservation really made all that possible in our modern world.

10 thoughts on “Benefits of canning and preserving food”