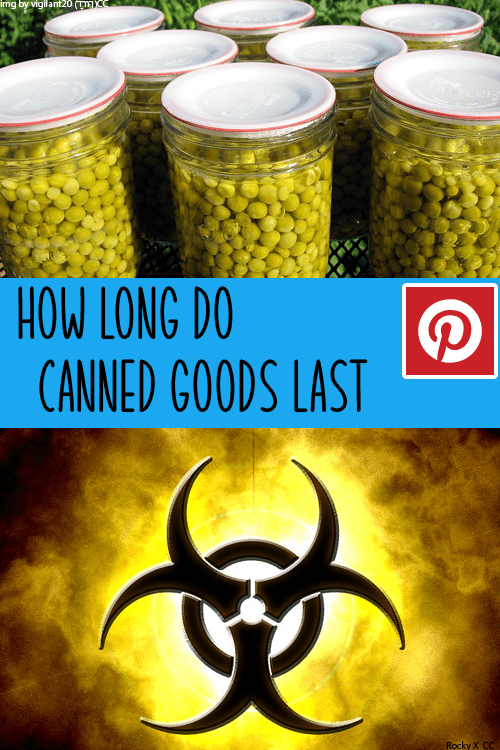 Canning is one of the best preservation methods mankind has utilized over its long history. It has allowed us to explore the world, fight wars, and grow into a massive population.

Even today with global shipping of fresh produce on a daily basis, We still return to the trusty can more than ever before in our history. Why? Because it’s convenient and stable. It’s proven itself to us time and time again.

But how long do canned goods last really? If you were building a storage or a bunker, Would you be able to set and forget large amounts of canned foods?

We dive into these answers for you.

A couple of things we need to distinguish first before we can talk about the shelf life of canned non-perishable goods. There are 2 types of cans we’re going to discuss in this article, Home jarring/canning, And store-bought cans. Think soup, peas, etc.

So with that said:

How Long Do Canned Goods Last

Both commercial and home cans have the potential for extremely long shelf life. According to the FDA, the life span of commercially canned food is 18 months for high acidic foods, and 5 years for low acidic foods.

However, it’s also noted that if kept in the correct and optimal conditions, there is no time span on the edibility of the food inside the can.

This means theoretically it doesn’t expire at all.

Obviously, degradation will eventually happen, albeit a slow process, so don’t expect a 20-year-old can of beans to tastes very nice.

If you happen to be canning your own food like many of us love to do, Then this information is for you. How Long Do Home Canned Goods Last? Home-canned goods, in general, will last about 1.5 years on the shelf.

Of course depending on the type of food and the type of method used to seal it up, this can vary by a lot. But generally speaking it’s safer to not chance home canned food lasting more than 1.5 years as the negative consequences if it has gone bad can be illness and possibly even death.

How can you tell if canned food is bad?

We felt the need to talk about this one specifically because of how high it’s acidic level is. Just as any other commercially canned product, it doesn’t specifically have an end date.

But because of it’s massive acidic level, the can itself is likely to degrade or rust out long before the fruit itself has turned bad. This is a common problem with acidic canned goods – and almost anyone who has kept food for a long time in a pantry can attest too, these eventually leak.

So does canned pineapple go bad? Not on it’s own, but it’s can is susceptible.

Can canned pineapple have botulism?

Due to it’s massive acidity, pineapple is not a good medium for the growth of botulinum. The acid destroys the spores that would normally cause illness.

This doesn’t mean it can’t happen, So all the following should be observed:

How can you tell if canned food has botulism?