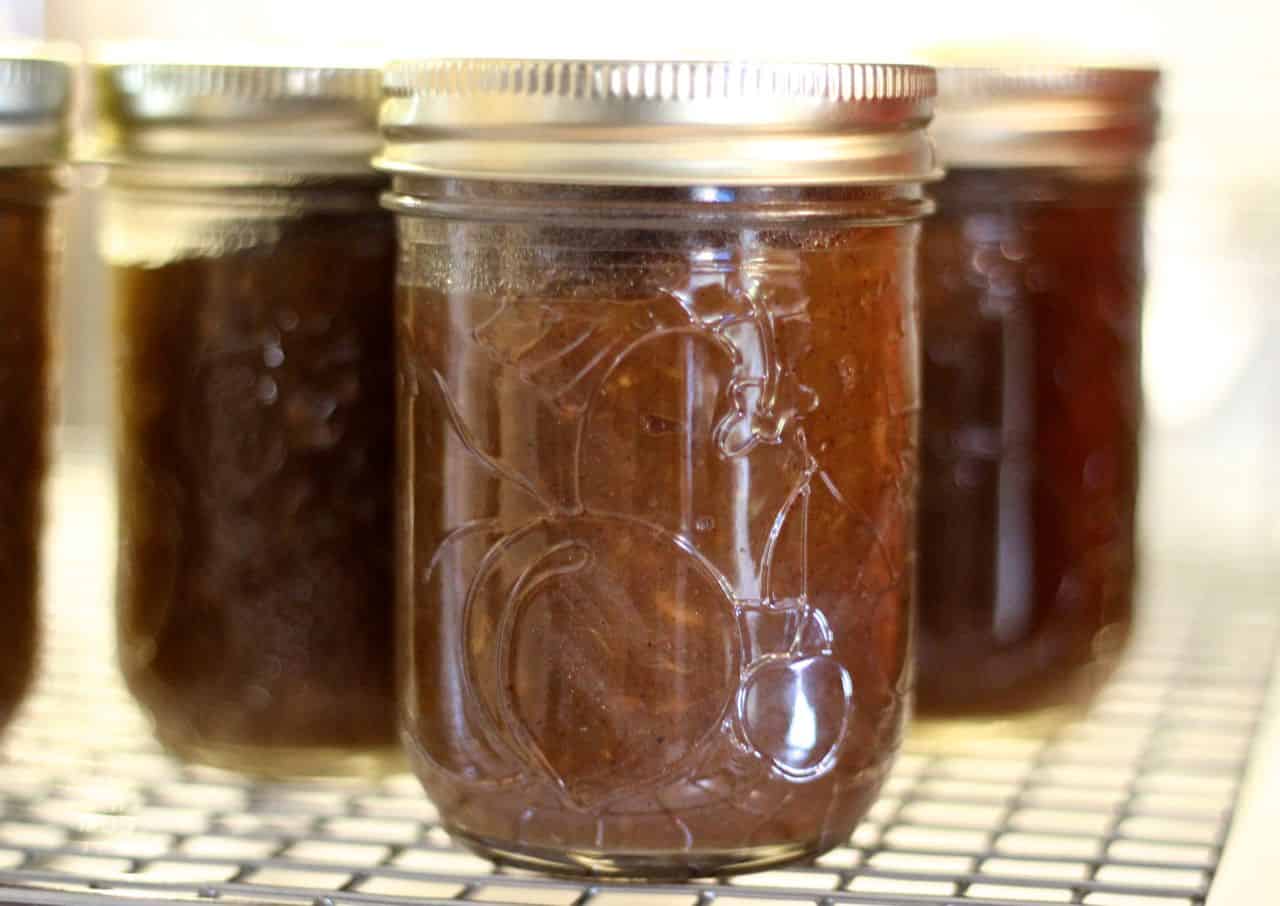 One of the best and easiest ways of preserving food is through canning. Jellies and jams are just a good thing to start with. With home canning methods, you can preserve many things, as long as you have prepared the food properly. You can also add some flavor and preserve it by picking it fresh off the trees or vines.

Canning apple butter without sugar can save you some rewards for the winter. That’s why you need to learn how to can them. Canning is still a very popular activity to most people. An art that has been refined over many generations, and was once passed down family member to family member. These days most of the canning knowledge comes from a few books or the internet! Sure makes life easier.

You can learn some great recipes from those books. These books serve best for generating new ideas. In this article, you will know everything about canning apple butter no sugar.

How to avoid botulism:

In general, there are two ways of canning, one boiling water canning and another pressure canning. The boiling water technique is widely adopted by many people at home. This is because it is easy, requires less equipment, and gives a great finish.

Pressure canning, on the other hand, is very useful for sorting out lower-acid foods. Both prickling and canning preserve food by inducing an environment where bacteria can’t grow. In fact, bacteria are responsible for decay and spoilage.

For survival, bacteria need moisture, less acid, moderate temperature and oxygen. Among these things, canning mainly depends on the absence of oxygen for inhibiting bacterial growth. While processing, jars are submerged in boiling water.

When the jar heats up, the contents inside it expands. As such, the air at the top is forced out of the lid. The food cools down and retracts soon after the jars were taken out. It creates a negative pressure inside the jar. The lid is sealed from the top and prevents air from getting inside.

This results in a vacuum where bacteria can’t grow. Hence the food remains safe until you open the lid. However, lack of oxygen will take care of the bacteria, but what about the bacteria spores? These spores can only be killed by more heat and they can flourish in the absence of oxygen.

When they are left alive, they produce a toxin that is responsible for botulism, a dreaded paralytic disease. Thus to prevent botulism, you need to kill them with extreme heat or acid. The jars can’t get enough heat for killing the spores in boiling water canning.

Therefore when you will use the boiling water technique, the ready mixture should have a lower pH level of 4.6 or less. That’s enough acidic to eliminate botulism spores. Almost every fruit is acidic and vegetables become acidic when they are treated with vinegar.

If you desire to experiment with a low-acidic food such as non-pickled veggies, pressure canning is the only way out. This process is similar to that of boiling water technique, except you need to do it under pressure.

Under pressure, water boils at high temperatures and can reach up to 250 Fahrenheit. At this temperature, there won’t be any botulism spores. However, the focus is put on the boiling water method in this article for canning apple butter no sugar.

How to can make apple butter with boiling water method:

Canning apple butter without sugar is easy by using the boiling water method. All you need to have are some jars that have two-piece lids, tongs, a big pot, apple butter with no sugar and of course water. If you want to have fewer injuries to your hand, you need to buy some additional supplies.

A jar lifter is a must. It is recommended not to use tongs made with rubber bands at your home. These look pretty unprofessional. If you want to have the whole setup, you can opt for the canning kits. These kits are great for such type of activities.

The small versions of such kits come with a jar lifter, a jar funnel, several tongs, and a magnetic lid lifter. The large ones have a rack to keep the jars and a giant canning pot. However, this stuff is quite useful, but not necessary. As aforementioned, to elaborate on the canning process, the apple butter recipe is to be used.

Because apple butter is very easy to make, it is the best way to try canning on them. You can try this recipe with locally available apples. Almost every apple that you find will give you the exact taste of apple butter. You can enjoy it during the winter to spring. Put into oatmeal or spread it on toast, whatever you like.

How to make apple butter without sugar:

Have you ever got hold of homemade apple butter? If not, you have missed out something. Some people may not like this recipe, but it is as good as to be eaten spoonful. And above all, it is very easy to make. If you have already tried out making homemade applesauce, doing some additional stuff would get you apple butter.

Add some spice to the applesauce and let it sit for some time until it cooks down and becomes thick. You can use a slow cooker as it will make the process easy. That’s because you need not worry about stirring it constantly and getting those apples burned while cooking down.

There is no need to peel the apples before getting started because the skins will blend into the mixture. This will add an extra amount of nutrition to the apple butter. As said, canning apple butter with no sugar is a fool-proof procedure.

You have to cook down the applesauce as thick as you like. You can even taste it while cooking, but be careful about that. Add certain species as desirable to you. However, it is unlikely that you may burn the applesauce at a lower heat.

If the opposite happens, all you need to do is pour the mixture into a separate place and leave the burnt parts in the cooker. Clean it off gently, and transfer the unburned applesauce back to the cleaned cooking pot. Continue to cook until the butter has reached the thickness that you had desired.

Cook the butter until it is reduced by half of the number of apples. Depending on how much butter you want and how many apples the cooker can hold, make the necessary adjustment to the quantities. Here are the ingredients for making about 16 to 20 ounces of apple butter without sugar.

Chop the apples and put them in the slow cooker. Add ginger, cloves, cinnamon, and water to it. Cover it and cook for about 6 hours until the apples become tender enough to be mashed. Use a blender to puree the mashed apples.

Place it again in the slow cooker and loosely cover it with the pot. Cook for another 6 to 8 hours until it is reduced to half. Transfer the applesauce to a saucepan and medium-heat for thickening it. Once it is thick and nice, transfer it to the bowl.

Canning apple butter with no sugar:

Fill the canning pot with enough water so that it can cover the top portion of the jars when submerged. Insert the clean jars and boil them. Now, the jars and lids are both sanitized. Boil the butter again, and put them into the jars.

Leave around A of an inch of air at the top. Wipe off any excess butter on the jar’s rim. Put the lid on the top of the jar. Screw it until you feel that it’s beginning to tighten. If the lid is overtightened, or if the jar isn’t filled up enough by the apple butter, they won’t seal properly.

Keep in mind to follow these steps carefully, or things may go south. When the jars are fully prepared, insert them again in the boiling water. Ensure that the water remains about an inch higher than the lids of the jars. Boil them for another 10 minutes. Adding a few more minutes will be fine.

Take out the jars from the boiling water and place them on the countertop. Keep them as it is for at least a minimum of one hour. Once they cool, you will notice the lids pop. An hour later, gently push on the center of the lids to check.

If the jar lid pops up and down, it didn’t seal well. Put those particular jars in the refrigerator and begin using the butter. The sealed jars should be allowed to sit the entire night to cool. They will be stable in the pantry and you can enjoy the apple butter for the months to come.

After you have made homemade applesauce, perhaps you can try to make apple butter. And, it seems to be the next logical step! When you follow these steps, you can enjoy your canned apple butter for the upcoming months.

This is a very simple recipe designed to give you the best possible apple butter with out all the extra additive sugar or by needing to use the apples own peels.

Things to note before you start:

Remove the core from the apple than chop them up, you don’t need to remove the peel but you can If you would like too.

Empty the bowl of apples cuts into the slow cookers and add your water and your spices.

If you have an immersion blender, Use that, if not, Than dump it into a blender. In either case, Blend until smooth.

Put it back into the slow-cooker and set the temperature to high. Allow to cook for an additional 2 hours. Do not place the cover back on with a full seal, leave a gap for moisture to escape during this final step. Stir every half hour.

Stick it on a counter and  let it cool down, than bottle it.

This is a very simple and basic recipe that anyone can do with almost no ingredients, and most importantly, No added sugars.